We had some great ideas for the project, I like where this is going.

1. Name of someone to contact (and their contact info) regarding climate change. For instance fireman, meteorologist, etc.

2. 3-4 questions regarding climate change (i.e. what are you curious about, is there something you don't understand?)

At the table we need to get our chassis locked and our missions started. The clock is ticking, we need to make some progress.
Posted by GeekyTom at 8:40 PM No comments:

Saw this post on Gizmodo, though it interesting and applies to our theme this year.
Posted by GeekyTom at 1:58 PM No comments:

I know all of you guys aren't visiting the website regularly. But I want to reward the ones that are. The first person at a meeting to use the code phrase "Red brick plus blue brick equals not enough bricks" will win a LEGO prize.

In other news FLL has posted some Q&A rulings. They have added several notes on the table that will help us and clarifies some setup. Check them out here.
Posted by GeekyTom at 10:16 AM No comments:

As we discussed last night our new weekend meeting time is Saturdays 4:30-7:00.

See you then!
Posted by GeekyTom at 8:11 AM No comments:

One of our past sponsors, Dawn Williams (aunt of Austin, Morgan and Rawley) has once again made a generous donation to the team. Thank you so very much!

The meeting yesterday was interesting. As an experiment I decided not to give specific directions to any of the team members. The results: almost nothing was accomplished (at least on the surface). Granted we were several team members shy yesterday, so I didn't expect us to make much progress, but still...

Team members, you need to start taking an active role. It's easy enough for me to say "connect this to that" and then "no, make it bigger, like this" but what is really happening then? The results are me building a robot with someone else's hands. I want you to create it. I know it's daunting, I know some of the challenges are mind boggling, but it's supposed to be. Expect it not to work the first time, or the second, or the eighth time. That's part of inventing, that's part of designing. In my tinkering yesterday I went through 4 different chassis configurations, none of which worked very well. That doesn't mean I failed 4 times, I just discovered 4 ways not to build a robot for this challenge (yes, I'm plagiarizing Edison :-)

Some good did come out of the meeting, nick experimented with Technic building, and whether he knew it or not he was learning about the mathematics of LEGO, stored energy, inertia and kinetics. Austin did some experimenting with mounting a ultrasonic sensor, and discovered at least 3 ways not to do it. Connor learned about drag and friction. And of course we spent some time talking about the project and learning about climate changes. So we're accomplishing something, you guys are learning.

I'd also like to say thanks former team member Morgan for hanging out with us yesterday. It was great having you around again, even if only for a visit.
Posted by GeekyTom at 5:52 PM No comments:

This weekend's meeting will be on Sunday, 2-5.

I ordered a rechargeable battery for the NXT today. They're a bit pricy so I only picked up one and a charger for now. We'll give it a go and see how it works. It will pay for itself in a couple seasons and it allows us to build our robot in such a way that we don't have to worry about removing the NXT. All we need to do is make sure the buttons and display are clear and we can access the charger port.
Posted by GeekyTom at 10:36 AM No comments:

I thought this video was pretty cool, and pretty inspiring.

Well, we certainly have our work cut out for us. Some of these challenges are pretty strait forward, some are absolutely baffling. But they'll all be fun to figure out. Please try to visit this website often for updates and news. And if you aren't on the mailing group already, give me your email and I'll invite you.

Everyone remember your homework, visit your assigned website and report back on Wednesday with your findings. Give some thought to the climate of the central coast, what other problems can we identify?

Also, think about who might make a good addition to the team, we have up to 2 more slots if you know someone interested in science and technology.

Nick and Forrest, welcome to the team.
Posted by GeekyTom at 7:45 PM No comments:

Although the challenge details are being released this Friday, we're going to have our first meeting on Sunday from 2:00-5:00. This day works better for more schedules. That doesn't mean you have to wait to look at the challenge details though. Log in to the FLL site after 9:00AM on Friday and check out what we have in store for us (you can bet I'll be there at 8:59!). I'll make sure the field is fully set up before the meeting. We'll have snacks and drinks.

See you Sunday!
Posted by GeekyTom at 7:20 AM No comments: 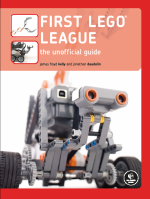 James Kelly from The NXT Step was kind enough to send me his and Jonathan Daudelin's new book First LEGO League. I know that we get a lot of visitors here and I thought I'd post a mini review.

This book is awesome! I wish that it was available 3 years ago when we formed our team. Even with 2 seasons under my belt I still learned a ton from it and I feel better prepared for the upcoming season. The book covers nearly everything you need to know, from finding members and forming a team to building and programming a robot. It covers all four aspects of FLL with enough detail to be informative, but not so much that it becomes cumbersome. There's even little stories and anecdotes from real teams sprinkled throughout. This book is a wealth of information and is the perfect compliment to the official coach's guide provided by FIRST. It also gives some great insight from a judge's perspective.

If you are an FLL coach, team member, mentor or parent you NEED this book!
Posted by GeekyTom at 7:58 AM No comments:
Newer Posts Older Posts Home
Subscribe to: Posts (Atom)